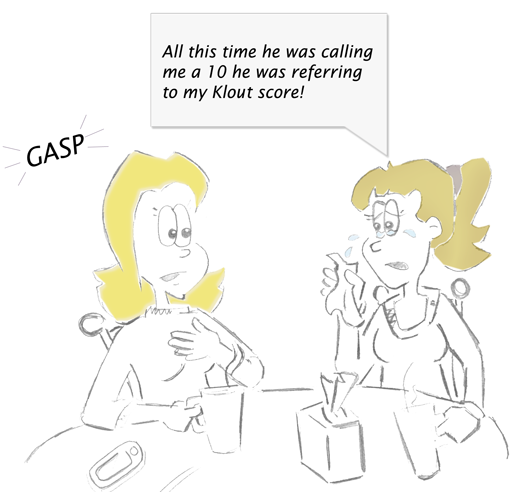 As I've said previously, I understand and appreciate what Klout is trying to do. But assigning a single score to something as nuanced and contextual as "influence" is the 3rd rail of online identity. When you reduce a person to a number, and that number is wildly at odds with the collective community's assessment of that individual's true influence, there's going to be a vocal, public backlash. And almost beyond comprehension, Klout has been caught flat-footed and fumbled their response to each successive firestorm that has arisen.

With that in mind, I recently read what IMO was one of the most "interesting" pieces I've seen in support of Klout, but you decide for yourself >> "There Is No I In Klout".

You say “Klout can be gamed you say? So can Facebook, Twitter, Google.” The problem with that argument is that none of those sites exist to promote a single metric scoring system, let alone one that purports to be the standard of measurement for something as nuanced as influence.

For god’s sake, when the Twitter account of a fictitious snake has a higher Klout score that 98% of the humans Klout is tracking (https://twitter.com/#!/bronxzooscobra), you can tell that something is seriously wrong.

In general, I believe attempting to measure "influence" per se is largely a fool's errand. What Klout should do is state clearly that what they're actually measuring is "a person's ability to attract attention and amplify message", because that's exactly what they're doing. It's not influence in any traditional sense of the word, and insisting that it is drives people crazy. Even worse for Klout, it gives people a reason to call the entire product/company in to question.

Klout, you can largely fix your PR problem with a single swing of the bat - just change your positioning statement to reflect what you're actually attempting to measure. People will better understand the product and will respect you for clarifying your objectives. It'll also show them you're truly commited to honestly addressing their concerns. But your current strategy of claiming transparency while providing nearly none only continues to undermine what otherwise is a laudable long-term goal: Helping organizations and individuals identify and engage high-target amplifiers.